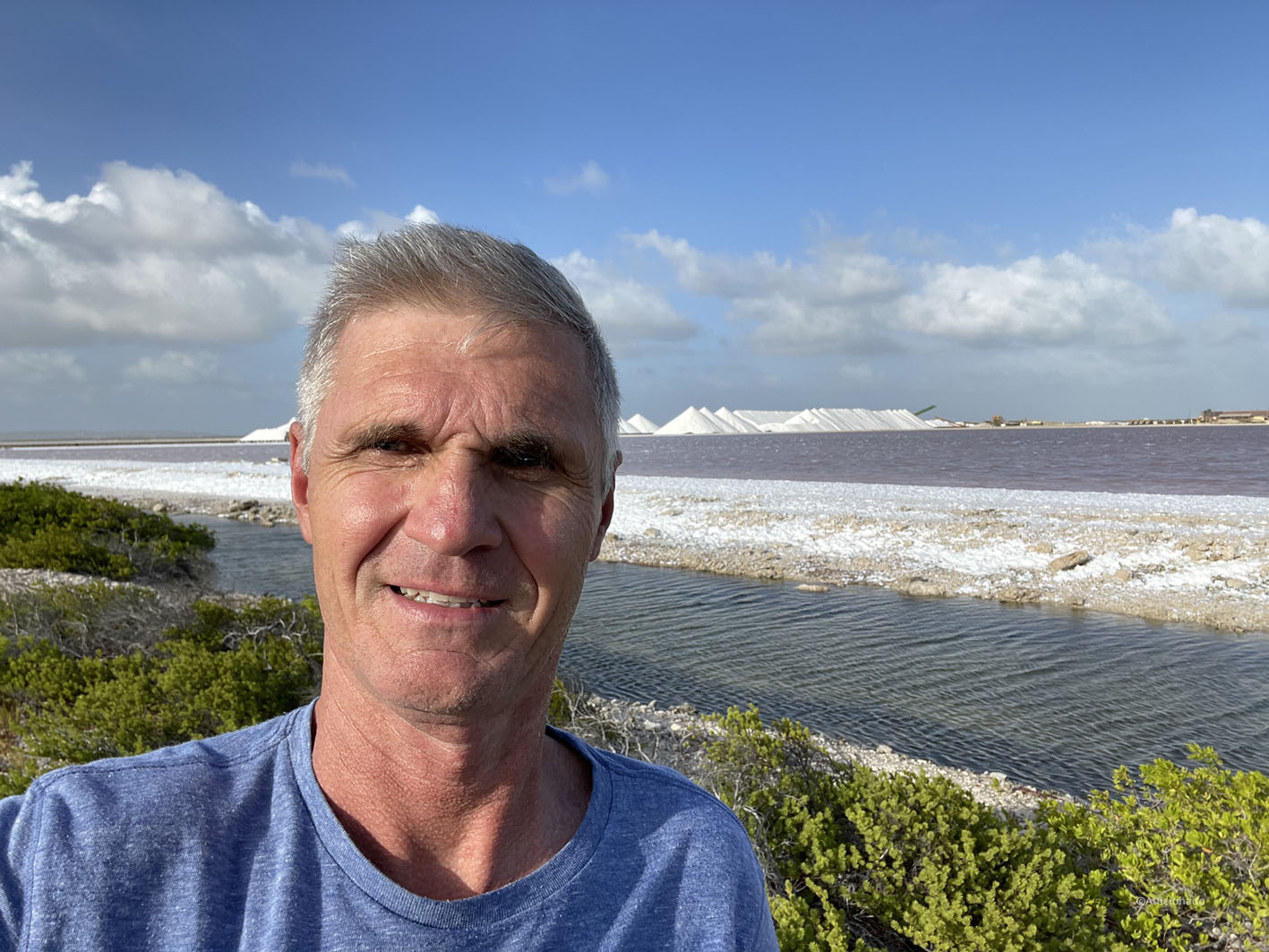 Kralendijk, Bonaire – one of the three islands of the Caribbean Netherlands

Venezuela really does not like us! When flying the approved flight plan to Bonaire we were told not to have any authority to fly over Venezuelan air space once getting closer to its borderline. After holding in circles for 20 minutes and hectic communication in the background we got to proceed as planned after all. But that was not enough nuisance for today. In Bonaire, apparently based on our obscure fight route, we got searched again and they made us declare the money we store on the plane for fuel. The “Dutch” were nice but miniscule, so that cost us another hour. And did I mention that the arrival hall at Flamingo Airport is not much more then one big roof, let alone air-conditioned!

Once in we enjoyed a lunch in a beautiful and colorful setting before going on a tour around the island. Our driver Syndy was very knowledgeable providing a lot of information about the island and its people. The island kind of has two vastly different faces on each side of the capital Kralendijk which sits in the middle. The north is more green with lots of bushes sitting on a slightly elevated volcanic rock plateau dotted with nice beaches and lots of opportunities for diving. At the end also sit the remains (huge oil storage tanks) of the heydays when large amounts of oil was stored here and sold based on favorable market conditions. In the middle is the small capital, a colorful village with a lot of shopping and dining at the seafront, all geared toward mostly Dutch and Belgian tourists.

Afterwards we headed south for today’s highlight, the solar salt facility. First we passed the eastern shore, a kite surfers paradise. A bit further south are traces of slavery in the form of tiny and simple dirt huts, which used to house up to 6 humans at the time, unbelievable based on today’s standards. Finally once circled around the southern tip of the island we approached the huge colorful salt water basins where the salt is being harvested from and stacked on those impressive and magic salt hills shaped like cones, indeed a special sight.

Finally finding a restaurant which was open and offered available seating was a challenge as a big part of restaurants are closed on Mondays and being between seasons some of the owners left the island taking vacation, making the choice even more narrow. The final result was lackluster to say the least and we hit the sacks early hoping for better food tomorrow, remembering that breakfast this morning in Georgetown was disaster as well.

Bonaire is an island in the Leeward Antilles in the Caribbean Sea. Its capital is Kralendijk, near the ocean on the lee side of the island. Aruba, Bonaire and Curaçao form the ABC islands, 80 km off the coast of Venezuela. Unlike much of the Caribbean region, the ABC islands lie outside Hurricane Alley. The islands have an arid climate that attracts visitors seeking warm, sunny weather all year round. Bonaire is a popular snorkeling and scuba diving destination because of its multiple shore diving sites and easy access to the island’s fringing reefs.

The most accurate human remains on the island date back to 3300 BC in Bonaire. These individuals are currently called by term Archaic Indians. The Caquetío Indians, a clan having a place with the Arawak language family, arrived at the islands from South America around 500 AD. The Caquetios were apparently very tall people, the Spanish named the ABC islands ‘las Islas de los Gigantes’ or ‘the islands of the giants’.

In 1499, Alonso de Ojeda arrived in Curaçao and a neighbouring island that was almost certainly Bonaire. Ojeda was accompanied by Amerigo Vespucci. The Spanish conquerors decided that the three ABC Islands were useless, and in 1515 the natives were forcibly deported to work as slaves in the copper mines of Santo Domingo on the island of Hispaniola.
Under the Dutch West India Company Bonaire became a plantation of the Dutch West India Company. A small number of African slaves were put to work alongside Indians and convicts, cultivating dyewood and maize and harvesting solar salt.

After the war, being occupied by the Germans, the economy of Bonaire continued to develop. Salt production resumed in 1966 when the salt pans were expanded and modernized by the Antilles International Salt Company, a subsidiary of the International Salt Company. Politically Bonaire formed part of the Netherlands Antilles from 1954 to 2010; it is now a special municipality within the Netherlands (officially, a “Caribbean public body”) within the country of the Netherlands. An 80% majority of Bonaire’s population are Dutch nationals, and nearly 60% of its residents were born in the former Netherlands Antilles and Aruba. In 2011 the island officially adopted the US dollar as its currency