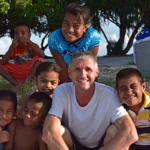 Flying almost another 3 hours straight north (equivalent to Rome – London) we reached another wonderful lagoon. However, Kiribati has about ten times as many people and this is visible on ever corner here. Space is scarce and the area which is habitable is overcrowded, left alone the debris on land and in the lagoon. Nevertheless, the people seem to love their life, are friendly, always smile and it was very refreshing to see how families spend their Sunday afternoon at the beach, letting even very small kids roam freely on land and in the water. Naturally the kids are very interested in us foreigners and what we were doing here, left alone their intrinsic curiosity. We spent some time at a beach and were rewarded with many laughs and happy faces. The hospitality of the locals is infectious.

Our second day was filled with yet more lasting impressions on daily life here in Kiribati. Riri, our lovely receptionist and tour guide wanted to give us a tour of the island which in the end turned out to be an odyssey to find gas which is very scarce here. After driving in one direction we soon had to realize that our best chances to make it back was to not only turn around but switch of aircon and shifting the truck into neutral whenever possible to save gas. We managed to find some more and get an impression of the bloody battle in 1943 during WWII and were able to visit its remains. Our daily food for thought was complemented by a drive through the still existing Japanese road build around the system of bunkers built then which is now being used by the fast growing local population.

Situated above and below the equator, Kiribati includes the Gilbert, Phoenix and Line Islands. Officially the Republic of Kiribati, the nation comprises 33 atolls and reef islands and one raised coral island, Banaba. They have a total land area of 800 square kilometers and are dispersed over 3.5 million square kilometers. Their huge spread straddles the equator and the 180th meridian, although the International Date Line is indented to bring the Line Islands (which are far to the east) in the same day with the rest of the Kiribati Islands. The permanent population is just over 100,000 (2011), half of whom live on Tarawa Atoll.

First settlers arrived over 3000 years ago from the Caroline (now FSM) and Marshall Islands. Due to its remoteness Kiribati was mostly bypassed for hundreds of years, even though Spaniard Pedro Fernandez de Quiros landed already in 1606. The group of island came under British influence and together with Tuvalu a protectorate from 1982 until its independence in 1979.