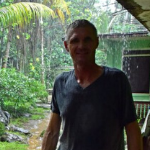 Leaving the Marshalls was easy (even though we left a day early) and favorable winds brought us to Pohnpei in just over three hours. What seemed to be an easy handling process turned out into an unresolved problem at this stage. We simply can not get any kerosene at this time, not because there isn’t any on this island, no the metering system is broken. Go figure.

While Tom and Rainer tried to resolve the problem at the airport (unsuccessful) Thomas and myself made the best out of it and took a trip around the shoreline to the ancient ruins here, truly amazing. In general this island is quite the opposite of what we have seen in the last few days.

Mountainous, lush and green, very tidy and clean. A real feast for the eyes. Let’s hope we can get our fuel tomorrow and move on to Saipan.

Unlike many other low laying pacific island Pohnpei is of mountainous type covered by tropical rainforests. It gets a huge amount of rainfall mostly in the central part of the island.

Pohnpei was divided into three kingdoms by a line of native kings. The islands was first sighted by Spaniard Alvaro de Saavedra in 1529 but then mostly forgotten for centuries. Over the time European navigators and trading vessels visited but ultimately the Spanish took control. Like many other islands in the area, Pohnpei later fell under German colonization, , then governed by the Japanese after WW1 as a result of the Treaty of Versailles. Luckily Pohnpei was bypassed by the US Navy during the island-hopping amphibious campaigns of 1943–1945. As a member of the Federated States of Micronesia, Pohnpei achieved independence in 1979 after being administered by the United States under UN auspices since 1947 as part of the Trust Territory of the Pacific Islands.

The population is around 34’000 with the majority still being ethnic Pohnpeians and the island boasts monumental ruins from every period of its history being Micronesian, Spanish, German, Japanese and American. And last but not least, Pohnpei is the capital of the Federated States of Micronesia (FSM) and therefore has many government jobs and schools not found anywhere else in the region.