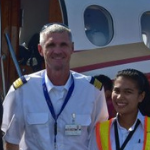 Singapore Airlines got us in style and on time down to East Asia. As expected it is hot and humid, but that’s something we will have to get used to. Getting out of the airport and the hotel was very swift and efficient, Tom was joking already that the first transfer was even already waiting for us (why would’t it!).

The rest of the day was spent checking out the immediate of the hotel around the Formula 1 circuit. This was a big sports days for the locals since the largest paddling competition was held on the artificial lake. Later for dinner we met the crew that flew our plane from Mollis to her and caught up with friends living here.

Check this video giving an impression of the earl morning atmosphere from the famous pool at the Marina Bay Sands.

Singapore (officially the Republic of Singapore) is a global city and sovereign state in Southeast Asia and the world’s only island city-state. It lies just above (137 km North) of the equator, at the southernmost tip of continental Asia. Singapore’s territory consists of the diamond-shaped main island and 62 islets. Since independence, extensive land reclamation has increased its total size by 23% (130 km2).

The islands were settled from the second century AD by a series of local empires. In 1819, Sir Stamford Raffles founded modern Singapore as a trading post of the East India Company. After the company collapsed, the islands were ceded to Britain and became part of its Straits Settlements in 1826. During World War II, Singapore was occupied by Japan. It gained independence from Britain in 1963, by uniting with other former British territories to form Malaysia, but was expelled two years later over ideological differences.