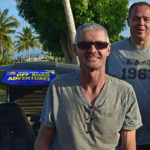 Leaving the Yasawas in Fiji was easy but had its potholes since managing to get on the seaplane entirely dry was a challenge. Nadi handling was just a joy again and off we were towards Tonga. Now one needs to understand that life happens on a different pace here, whatever it is. So bringing along patience is a big plus and the start for a great experience. There is nothing special on Tonga but hey, the people are certainly very friendly and I don’t think we ever slept as close to any Royal Highness like we did here, staying just a few hundred meters down the road from the royal palace at the very friendly Litte Italy Hotel & Restaurant.

The Kingdom of Tonga, is a Polynesian sovereign state and archipelago containing 177 islands of which 52 are inhabited. The entire area is about 750 square kilometers scattered over 700,000 square kilometers of the southern Pacific Ocean. The population is just over 100’000, yet most people live on the main Island Tongatapu and the nations capital Nuku’alofa.

Tonga, unlike most other islands in the Pacific, has never lost its sovereignty to a foreign power. In 2010, Tonga became a fully functioning constitutional monarchy, after legislative reforms paved the way for its first partial representative elections.

Besides beautiful beaches, abundant wildlife on and under water, Tonga has another not so shiny side. Its inhabitants mostly live of transfers from its diaspora and Tongans are known to have the highest rate of obesity.