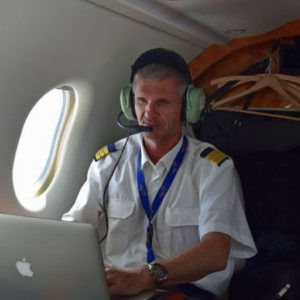 After some heavy downpours over night we were lucky to get out of Apia in good weather. A good two hours of flying time later we were approaching Tuvalu, our first classic South Pacific lagoon. We were hoping for open skies and sun in order to get a good look at the Tuvalu lagoon. We got permission for a sightseeing loop and were rewarded with outstanding aerial views.

On the ground it seems like the whole island was greeting us, no wonder the town is pretty much build around the airstrip. We rented some bikes in the afternoon and toured around the tiny island. As one can see from the photos this is not the paradise we have in our minds, but the locals are very friendly and helpful. It seemed like around every corner was either a micro gas station or a mechanic who could help me with the problems I had with my bike. As dining options here are limited to say the least, we enjoyed a great sundowner and dinner at our hotel.

Tuvalu, formerly known as the Ellice Islands, is a Polynesian island nation located in the Pacific Ocean, midway between Hawaii and Australia. Tuvalo means ‘cluster of Eight’ after the number of originally inhabited islands.

The first inhabitants of Tuvalu were Polynesians who came over 2000 years ago from Samoa (via Tokelau) and Tonga.

In 1568, Spanish navigator Álvaro de Mendaña was the first European to sail through the archipelago, sighting the island of Nui during his expedition in search of Terra Australis. In 1819 the island of Funafuti was named Ellice’s Island and this name was later applied to all nine islands. The Ellice Islands were administered as British protectorate from 1892 to 1916 as part of the British Western Pacific Territories (BWPT), and then as part of the Gilbert and Ellice Islands colony from 1916 to 1974.

A referendum was held in December 1974 to determine whether the Gilbert Islands and Ellice Islands should each have their own administration. As a consequence of the referendum, the Gilbert and Ellice Islands colony ceased to exist on 1. January 1976 and the separate British colonies of Kiribati and Tuvalu came into existence. Tuvalu became fully independent within the Commonwealth on 1. October 1978. On 5. September 2000 Tuvalu became the 189th member of the United Nations.