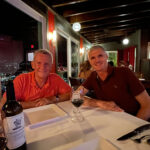 The US in The Caribbean!

A short hub over and we were in St. Thomas, at the airport that is. What followed was a fine example of how the US (customs and border control) have to show you their power. There was not a single plane there (hence nothing else to do) and yet it took almost two hours until we were cleared, even our handlers could not believe it. It went as far as the US customs officer made us unloading the luggage we still had on the plane and had it screened, even though this clearly violates international aviation law. Complaining probably would have meant another 2 hours of waiting time. Welcome to the USA.

Now one might come to the US Virgen Island with quite some expectations since millions of North Americans (and few others) come visit St. Thomas and the other islands every year, most abroad large cruise ships and private yachts. Charlotte Amalie is supposed to be a nice town with little streets and some Caribbean flair. What we got to see is a traffic burden dump, sorry there is no nicer way to dance around it. There still are a few streets dotted with old colonial buildings but they are either run down or house one of the uncountable jewellery outlets or other stores carrying brand and garbage items for tourists. I have seen quite a bit over the years but his is about at the level of American Samoa, another gem on top of the shit list of places not to visit and see.

Well, we made the best out of it, had some American finger food with American beer, trotted around town for a short while and then took a rest before dinner which we had on the hill overlooking the island accessible by cable which was not running today.

Well, I almost forgot. The best thing today was permission granted by BVI air-space-control to go on a scenic flight over Virgin Gorda and the other BVI’s on the way to St. Thomas which allowed for some magnificent views, again what a difference the way we were treated in the BVI as opposed to its American sister.

Charlotte Amalie, located on St. Thomas, is the capital and the largest city of the United States Virgin Islands. It was founded in 1666 as Taphus (meaning “beer house”). In 1691, the town was renamed to Charlotte Amalie after Charlotte Amalie of Hesse-Kassel (1650–1714), queen consort to King Christian V of Denmark-Norway. It has a deep-water harbor that was once a haven for pirates and is now one of the busiest ports of call for cruise ships in the Caribbean, with about 1.5 million-plus cruise ship passengers landing there annually. Protected by Hassel Island, the harbor has docking and fueling facilities, machine shops, and shipyards and was a U.S. submarine base until 1966. The Town has been inhabited for centuries.

When Christopher Columbus arrived in 1493, the area was inhabited by Caribs, Arawaks, Ciboney and Taíno native peoples. It is on the southern shore at the head of Saint Thomas Harbor. In 2010 the City had a population of 18,481, which makes it the largest city in the Virgin Islands Archipelago. Hundreds of ferries and yachts pass by the Town each week.

The City is known for its Danish colonial architecture, building structure and history. Dozens of streets and places throughout the City have Danish names. The Town has a long history of pirates, especially myths of Bluebeard, and facts and stories of Blackbeard (Edward Teach). In the 17th century, the Danes built both Blackbeard’s Castle and Bluebeard’s Castle attributed to the pirates. A copy of the Liberty Bell and freed slave blowing a conch shell are in Emancipation Park, which is both a source of national pride and a tourist attraction.

On his second voyage to the New World, Christopher Columbus encountered Native Americans living in the present-day archipelago of the United States Virgin Islands. Archaeological records indicate that the islands have been home to native american people groups, including the Taíno, Arawak, Kalinago/Carib, and the Ciboney people. Several of them lived in present-day Charlotte Amalie in small fishing communities. As was the case in most of the Americas, the native population died relatively quickly from disease when the Europeans settled. As the Spanish early focused their energy on Puerto Rico and other Caribbean islands, Saint Thomas remained unprotected for a long time, leaving Charlotte Amalie’s sheltered coves to be frequented by pirates, like Blackbeard, as well as mariners and European settlers.

The Danish West India Company chartered Charlotte Amalie in 1671 after King Christian V decided to secure them for plantations. The Danish government supplied convicts to work the plantations but soon allowed colonists from neighboring islands to settle there, as well as to permit the importation of slaves from Africa. In 1680, there were more black African slaves than white European settlers.

It remained under Danish rule until the US became interested and wanted to avoid German infiltration in the Lesser Antilles. The U.S. purchased the Danish West Indies in 1917 for $25 million. Charlotte Amalie was under U.S. Navy rule until 1931. The United States decided to make Charlotte Amalie the main headquarters of the renamed United States Virgin Islands. During the Second World War, the city became a naval base to protect allied shipping to and from the Panama Canal and became a tourist hot spot for Americans in search for Caribbean live without leaving US soil and subsequent a hot-spot for cruise tourism.