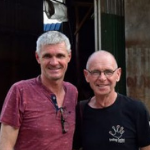 The problem with the fuel had been fixed the night before which meant that we made it in time to Cambodia. Here we meet the rest of the Frey family and headed on towards the “Killing Fields”. There is nothing to be added to the horror of this dark piece of history in Cambodia. The journey there was an experience of its own due to a sudden downpour. We took the trip to this historic site on Tuk Tuk’s from “Smiling Gecko”, an NGO that has been active in Cambodia for some quite some time with various programs aiming to take people out of poverty through empowerment (smilinggecko.ch).

The 2nd day in Cambodia started with a very intriguing look at the slums where the people come from that have the opportunity to be part of the smiling Gecko program and then on to see the projects further up North. These farms and villages are about 70km to the NorthWest of Phnom Penh and very well organized. What a difference to earlier the same day in the slums.

With a population of over 15 million, of whom over 95% practice Thervada Buddhism, Cambodia was a Southeastern Asian superpower with changing rulers until the 13th century.

Over the following centuries this country was more and more dominated by its rising neighbors. In 1863 the king sought protection by the French. This was the start of the French protectorate that lasted until 1953. Afterwards Cambodia became a constitutional monarchy until 1970, when the Khmer took over. The following years were marked as the black period under the Khmer Rouge regime.

Only in 1993 the monarchy was restored but all power went to government elected by a multiparty democracy.