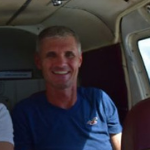 Sometimes small details make a huge difference. We had great uncertainty whether we could move on from Pohnpei due to a fueling problem. Turns out they came up with a fix overnight and we got our kerosene. Good winds then brought us to Saipan and finally, what we believe, somehow back to a more “normal world” with functioning showers, real meals and so on. All of that only after our plane was checked for radioactivity by the local police marshals.

Back in a more familiar environment  we are happy to  spend a couple of days here in the Northern Marianas to rest from the nourishing past week, to say the least. These islands are by far the cleanest and organised of what we have seen in Mircroesia, a good example when American influence can have a very positive impact. We toured the island to get a feel for what happened in 1944 during WWII and the tragic events around this campaign for everybody starting with US and Japanese soldiers but also the local population which got massively influenced at the time. Saipan was actually the turing point for the Pacific war as Japan got into reach of the brand new B-29 bomber which eventually dropped the atomic bomb onto Hiroshima and Nagasaki.

These days Saipan is known to Asians as a vacation and honeymoon location. Consequently dozens of mostly red and yellow American convertible cars can be spotted with young couples on their honeymoon, yet they also go to these historic places; what a mix for a honeymoon.

On our second day in the Marianas finally came a long time anticipated visit to Titian, the island where the B-29 bombers were loaded with the atomic bombs. We were touring the huge area that once was the busiest airfield in the world. The four huge runways can still clearly be seen from the air and we drove through the system of streets and runways which are slowing being taken back by nature. Afterwards we went to the only real town on the island for an authentic American-Mariana style lunch.

Saipan is the second largest (after American dominated Guam) of the Mariana Islands with Tinian lying to the North.

Archaeological remains date back to 2’000 B.C. when the people of Guam and the Northern Mariana Islands were of one culture. The Spanish were the first European to sight the islands in 1668 and loosely controlled them until the Germans purchased them from the Spanish in 1899. Powers changed to the Japanese in 1941 until The Marianas, except Guam, became part of the Trust Territory of the Pacific Islands (TTPI) after WWII in 1947. In 1975 the Northern Marianas were sliced from the TTPI by popular vote and became American Territory, akin the political states of Puerto Rico.

After Japanese occupation in 1941 and a bloody battle in the summer of 1944 Americans took control of these very strategic islands since they were in reach for the latest fleet of bombers for the Japanese main land. As a result, the US navy quickly built 4 major landing strips on neighboring Tinian. At the height of the bombing campaign, Tinian was the busiest airfield in the world with two B-29 bombers taking off abreast every 45 seconds. Notably the nuclear age began here with “Enola Gay” taking of Tinian on August 6th having “Little Boy” on board.