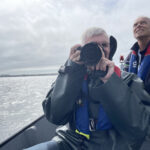 The “oldest Glarner”, a common, sometimes strong wind greeted us at the airport in Mollis, together we some loyal friends who bid farewell.

A pleasant first leg to Iceland came to an end with a not so easy landing in strong winds at Keflavik airport. The weather was also quite miserable, with lots of rain and cold conditions. After refueling we took off towards the North American continent. It required Major Tom’s strong persistence and leadership that we did not have to do an unwanted stop at Goose Bay, which would have cost us a lot of time.

Landing at Saint Pierre was again a bit bumpy but the pilots did a great job. No surprisingly we were the only plane there, as direct flight from France stopped during Covid and even service from Canada is not as frequent anymore. We had some sunshine into the early evening and a nice dinner at one of only five! restaurants in town.

Our second day, supposed to be a day off, was first taken by filing Covid forms for our next destinations; this seems to become one of our major tasks going forward. Then, the weather not being so inviting, the whole crew joined the local pilates class.😂😩😎

Finally the fog started to lift and we went out for a boat ride on a typical local fisher boat around the bay during which the sun came out and transformed everything into a beautiful setting. What a difference! The local fishermen and retirees had a field day with us since there was practically no tourism here for a quite a while. We then took a tour around the island seeing beautiful vistas in the low afternoon light followed by another nice dinner.

It is incredibly calm here. The whole island reminds me of Northern (Arctic) Canada. Most of the houses are solely built above ground with prefabricated elements, hence everything being quite orderly and colorful.

In the meantime we became quite popular around the islanders, everybody seems to know who we are and what we have done so far, I guess it is being noticed when such a beautiful jet shows up on their tarmac. No wonder, we also made it into the local newspaper and in the evening news on TV!

While all the locals were very friendly and helpful, a very special thanks goes to Sophie and her team at the Hotel Terrasses du Port who went out of their way by making us feel welcome, driving us around town up to finding a way to get the next set of Covid tests done as late as dinner time. 🙏

Saint Pierre and Miquelon, officially the Territorial Collectivity of Saint-Pierre and Miquelon, is a self-governing territorial overseas collectivity of France in the Northwestern Atlantic Ocean near the Canadian province of Newfoundland and Labrador. It is the only remaining vestige of French sovereignty in North America, other than the French Antilles. Its residents are French citizens and the collectivity is a full member of the National Assembly and participates in senatorial and presidential elections. It covers 242 km2 of land and shores and has a population of 6’008.

The islands are in the Gulf of St. Lawrence near the entrance of Fortune Bay, which extends into the southwestern coast of Newfoundland, near the Grand Banks of Newfoundland. St. Pierre is 19 km from Point May on the Burin Peninsula of Newfoundland and 3,819 km from Brest, the nearest city in Metropolitan France.

The inhabitants have traditionally earned their livelihood by fishing and by servicing the fishing fleets operating off the coast of Newfoundland. The climate and the small amount of available land militate against activities such as farming and livestock due to severe weather conditions confining the growing season to a few weeks, and the soil contains significant peat and clay and is largely infertile. Since 1992 the economy has been in steep decline, following the depletion of fish stocks due to overfishing, the limitation of fishing areas and the ban imposed on all cod fishing by the Canadian Government leave the island heavily dependent on France.

On 21 October 1520 the Portuguese explorer João Álvares Fagundes landed on the islands and named the St. Pierre island group the ‘Eleven Thousand Virgins’, as the day marked the feast day of St. Ursula and her virgin companions. In 1536 Jacques Cartier claimed the islands as a French possession on behalf of the King of France (Francis I). Though already frequented by Mi’kmaq people and by Basque and Breton fishermen, the islands were not permanently settled until the end of the 17th century. Four permanent inhabitants were counted in 1670, and 22 in 1691. From then on this territory was torn between raided by the British, then again sacked by French troops in 1796, turned over to the Brits once more in 1815 for 100 days until the French took possession of the then uninhabited island for good in 1815. The settlers, mostly Basques, Bretons and Normans, were joined by various other peoples, particularly from the nearby island of Newfoundland. Only around the middle of the century did increased fishing bring a certain prosperity to the little colony.

In 1903 the colony toyed with the idea of joining the United States, but in the end nothing came of the idea. During the early 1910s the colony suffered severely as a result of unprofitable fisheries, and large numbers of its people emigrated to Nova Scotia and Quebec. The draft imposed on all male inhabitants of conscript age after the 1914 beginning of World War I crippled the fisheries, as their catch could not be processed by the older men or the women and children. About 400 men from the colony served in the French military during World War I (1914–1918), 25% of whom died. The increase in the adoption of steam trawlers in the fisheries also contributed to the reduction in employment opportunities.
Smuggling had always been an important economic activity in the islands, but it became especially prominent in the 1920s with the institution of Prohibition in the United States from 1920 until 1933.
During World War II, despite opposition from Canada, Britain, and the United States, Charles de Gaulle’s forces seized the archipelago in December 1941 from Vichy France, to which the local government had pledged its allegiance. In a referendum on 26 December 1941, the population endorsed the takeover by Free France by a vote of 63 for Free France (98.2% of ballots cast) with three ballots voided.
The colony became a French Overseas Territory in 1946.
After the 1958 French constitutional referendum, the territory of Saint Pierre and Miquelon was asked to choose one of the three options: becoming fully integrated with France, becoming a self-governing state within the French Community, or preserving the status of an overseas territory; it decided to remain a territory.